I was recently asked by my friend Kevin Dart to contribute to his amazing Yuki 7 book and show at the Gallery Nucleus. For those not familiar, Yuki 7 is a far out fictional movie franchise Kevin created. In his own words, "Yuki is the ultimate hip 60’s chick. She’s sexy, her clothes are to die for, and she can beat any man or woman in a game of cat and mouse. In the world of espionage, no one can keep a secret from her and no one can resist her charm."

I think that nicely sums up the world of Yuki 7. Here's the poster I made for the finale film in the Yuki franchise.

This is the synopsis of the film:

Secret Agent Yuki 7 is dispatched to Greece after a fleet of nuclear submarines vanishes in the waters of the Aegean Sea. The mystery leads Yuki to the remote island base of Dr. Calamari, a French oceanographer who controls the predators of the deep with his strange and unnatural sciences. With a legion of underwater monsters at his control, the doctor captures the war machines of the world in a bid to create an atomic super weapon with the capacity to flood continents- codename: Manta Ray. In her ninth and final film, Yuki 7 must stop the Doctor before he initiates a terrifying age of aquatic dominance upon the world!

Here's a bit of visual development I made early on for Yuki's nemesis, Dr. Calamari. 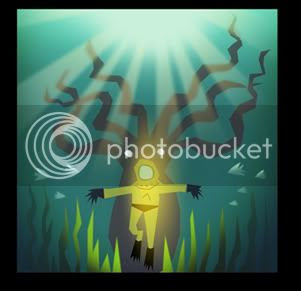 And Here's the finale ruff version of the poster.

The show opens at the Nucleus on July 3rd at 7:00PM. It will be a swell occasion and I hope everyone can make it.

Posted by justinpatrickparpan at 7:00 PM 25 comments: 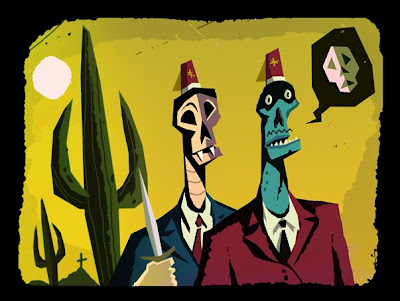 Work at JibJab and my contribution to the upcoming Yuki 7 show at the Gallery Nucleus have pretty much consumed my life as of late. To make up for my lack of posting I made this picture for you.

--Justin
Posted by justinpatrickparpan at 10:13 AM 8 comments: